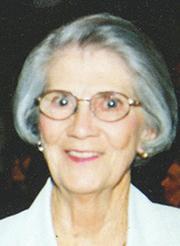 Georgiann Mary Husen, age 90, of Grand Island, passed away with her family by her side on Tuesday, July 24, 2018. Mass of Christian Burial was held Saturday, July 28, at Blessed Sacrament Catholic Church in Grand Island, with Father Martin Egging officiating. Burial was at Saint Mary’s Catholic Cemetery, Wood River. The family requests memorials to Blessed Sacrament Catholic Church or to the Alzheimer’s Association. Apfel Funeral Home is caring for the family. Online condolences may be directed to the family at www.apfelfuneralhome.com. Georgiann was born on December 26, 1927, to George and Eunice (Collins) Bohnart in Gaelton, Colorado, at the home of her maternal grandparents, Mary and Olza Collins. When Georgiann was three months old, her parents moved to Nebraska to start a farming operation near Wood River. Georgiann, the eldest of eight children, often shared fond memories of growing up on the farm with her six brothers and sister. She attended Schauppsville Grade School, Wood River High School, graduating in 1945, and Kearney State Teachers College where she received her Normal Training Certificate. Following graduation, Georgiann pursued her love of teaching by instructing several years at Hall County District #6 (Valley View) and Alda Primary Schools. On August 12, 1947, Georgiann was united in marriage to Alfred F. Husen at Saint Mary’s Catholic Church in Wood River. The couple farmed near Alda until retiring in 1994. After retirement, Al and Georgiann became snowbirds, spending winters in Arizona until Al’s death in 2000. Their marriage of fifty-three years was blessed with many happy times and six children. Georgiann was a true farm wife who worked alongside her husband to provide for her family. Whether that meant milking cows, feeding livestock or driving her beloved “Puddle Jumper” (a 1949 International Grain truck) to help deliver the Husen harvest, Georgiann could always be found working to help make their farm a success. Georgiann enjoyed being active and involved in her community. She started and led 4-H clubs, extension clubs, and several neighborhood fitness groups. She volunteered and taught religious education classes, tutored first grade students at Westlawn Elementary in Grand Island, worked at the Blessed Sacrament Thrift Shop, and served on numerous committees. She was a member of Blessed Sacrament Catholic Church, Catholic Daughters, and the Platt Deutsche Society of Grand Island. Georgiann enjoyed many hobbies including playing bridge, crocheting, reading and especially carving treasured Old World Santas for her friends and family. Georgiann faced life with deep faith and a gentle strength, always seeing the best in others and ever thankful to those around her. Her loving smile, compassionate heart, caring soul, contagious chuckle, and incredible wisdom will be missed by many. She leaves us with her love, which she so often expressed in her favorite saying, “I love you a bushel and a peck and a hug around the neck!” Those left to rejoice in her memory include four sons and daughter-in-laws, Greg and Joyce Husen, of Broken Arrow, Oklahoma, Dr. Steven and Sally Husen, of Grand Island, Jon and Tami Husen, of Caldwell, Idaho, and Henry and Sheri Husen, of Alda; two daughters and son-in-laws, Susanne and Chuck Sorahan, of Alda, and Jan and Roger Stortenbecker, of Lincoln; sixteen grandchildren; and thirteen great-grandchildren. Georgiann is also survived by her brothers and sister-in-laws, Gary and Nellie Bohnart, of Wood River, and Ed and Renee Bohnart, of Greenville, Wisconsin; sister and brother-in-law, Martha and William Ellis, of Omaha; sister- in-laws, Mary Bohnart, of Wood River, and Hilma “Tootie” Husen, of Grand Island; and many nieces, nephews, cousins, and a host of friends. Georgiann was preceded in death by her parents; her husbands, Alfred Husen and Glen Tucker; and brothers, Walter, Andrew, Robert and Donny Bohnart.