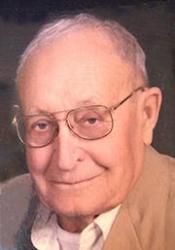 Donald E. Taylor, age 90, of Wood River, died Monday, September 17, 2018, at CHI Health St. Francis in Grand Island. Services were held Saturday, September 22, at First Presbyterian Church, Wood River, with Pastor Brad Jepson officiating. Burial was in the Grand Island Cemetery. Memorials are suggested to the Wood River First Presbyterian Church or the Wood River Community Foundation. Apfel Funeral is serving the family. Online condolences may be directed to the family at www.apfelfuneralhome.com. Donald Eugene Taylor was born March 30, 1928, at Wood River, the son of Oliver H. and Ella Mae (Hawks) Taylor. Don’s moth-er died when he was three years old and was raised by his father and grandmother. He grew up and attended District 76 School through eighth grade, then Wood River High School, graduating with the class of 1946. Donald served in the U.S. Army during the Korean Conflict from May 1952 until his honorable discharge at the rank of Corporal in May of 1954. He was united in marriage to Barbara Delamater on February 12, 1955, at Paulsboro, New Jersey. The couple made their home in Wood River where he farmed and was employed at Union 76 for 18 years, Bosselman’s Travel Center and later a greeter at Wal-Mart. He was a member of First Presbyterian Church in Wood River and Wood River American Legion. Donald enjoyed everything about the outdoors, hunting, fishing and gardening. He especially enjoyed the time he spent with his family. Those left to cherish his memory include his wife, Barbara Taylor, of Wood River; two daughters and sons-in-law, Ella and Donald Ray Heath, of Rushville, and Irene and Robert Falldorf, of Grand Island; two sons, Oliver Lee Taylor, of Lincoln, and Allen D. Taylor, of Beatrice; six grandchildren; and eight great-grandchildren. He was preceded in death by his parents; son, Clayton Taylor; and grandson, Keith Falldorf.